Firearm purchases are in near-record territory, and nearly 90 percent of those buying guns recently are new gun owners. The Covid-19 virus scare has caused many people to evaluate their own personal security. Perhaps you’re one of them, but the concept of getting a gun makes your head spin. What can you do?

The staff at Nexgen Outfitters consists of gun owners. Its knowledgeable experts will guide you through the purchase process and assist you in making a wise choice. You’ll be treated with respect and your questions will be answered.

When you’ve decided to buy a handgun and shop at Nexgen Outfitters, be prepared to answer a few simple questions. You’ll likely be asked what the intended use of the handgun will be. Answers usually include hunting, target shooting, personal protection, home defense or shooting competition. You will also be asked if you have any experience shooting a handgun. The more information you can provide, the easier it will be for Nexgen Outfitters to air in your decision.

Keep in mind a firearm used for personal protection may also be suitable for target shooting or even hunting. Most firearms will fill a role in two or more applications. For example, a .357 magnum revolver can be used for hunting, personal and home defense, and also target shooting. A .380 semi-automatic pistol is fine for personal and home protection, but it lacks the power needed for harvesting big game.

Revolver or semi-auto? Each has its pros and cons. Compact revolvers are ideal for concealed carry, but you’ll also find them in many homes for protection from criminals. The overall concept of how a revolver functions hasn’t changed much in more than a hundred years. A rotating cylinder above the trigger holds anywhere from five to eight rounds, depending on the model, and one bullet is fired each time the trigger is pulled. Revolvers can’t compete with semi-autos in the number of cartridges that can be fired between reloads, but research has shown the average number of shots fired in actual self-defense situations is 2-3 rounds per incident. The average range of engagement is 7 ft. So a compact revolver holding five cartridges should see you through the vast majority of situations you may encounter. Revolvers are also extremely simple to use. Pick it up, aim and pull the trigger. No need to be concerned about racking a slide, making sure a safety is off or whether or not a magazine is properly seated. But practice with your revolver so you make every shot count because reloading during the stress of combat is slow – even with speed loaders or moon clips.

Semi-automatic pistols are used by many more people for protection and defense than revolvers. They tend to be lighter, slightly easier to conceal, much faster to reload and usually hold many more bullets. There are a couple more steps involved in preparing a semi-auto to fire (insert magazine, rack the slide, disengage the safety), but most who carry them have completed the first two steps before they leave home so all they must do is aim and fire. Semi-autos come in a large range of sizes, shapes and calibers so finding one you like shouldn’t be a problem. And Nexgen Outfitters has an excellent selection on hand in its Sidney, NE retail store.

What would I recommend? If you’re new to handguns and aren’t sure what make and model you’d like to see, I’d show you a small .357 magnum revolver. The beauty of a .357 magnum revolver is its ability to shoot both magnum loads and .38 special cartridges. The .38 is no slouch. It was the standard police firearm for decades. And it also produces less recoil than the .357, which can be a handful in a small handgun. Taurus makes several fine compact revolvers, and I’d also show you a Ruger LCR.

If you haven’t shot much, for semi-autos I’d point you toward a compact .380 model such as Ruger’s LCP . Some say a .380 isn’t sufficient for personal protection but you won’t see any of those naysayers volunteer to be shot with one. I may also direct you to the latest offerings from SCCY in our gun case along with the Bersa Thunder .380 .

The firearms I’ve mentioned in this article should be considered “entry level” but they function as well as firearms costing far more. As your interest in firearms grows, we can show you mid- and full-sized handguns. For now, these will meet your need of a small and affordable firearm. 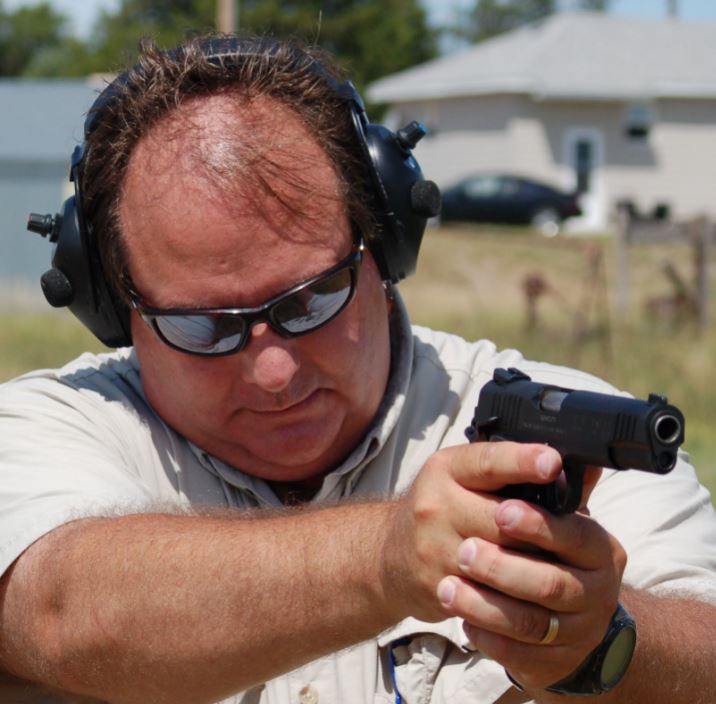