Pheasant season has already opened or is about to across the U.S. and tens of thousands of hunters are preparing to pursue the beautiful birds. Pheasants are not native to North America and while some were introduced from Europe as early as the 1770s, it wasn’t until about 100 years later that the first Chinese ringnecked pheasants arrived in the Pacific Northwest. It didn’t take long for the birds to take to American habitat and today millions of them live in more than 40 states. Breeders alone bring about 500,000 ringnecked pheasants to maturity every year, and hunters inject billions of dollars into local economies every fall while hunting them. For example, South Dakota estimates pheasant hunters spent $218 million in that state alone during 2018.

There are several species of pheasant worldwide, but the most common in the U.S. is the ringnecked pheasant. Originally a forest-dwelling bird in China, North American ringnecks have evolved into predominantly prairie and grassland dwellers. They can also be found in marshland and treed areas adjacent to crop fields. Pheasants are omnivorous and eat a variety of seeds and insects. When bugs become scarce at the end of growing seasons, look for the birds in or near crops that are still standing or recently harvested fields. Pressured birds will tend to move into thicker cover as the hunting season progresses. Often you’ll find them in stands of cattails or marshy weeds near lakes and ponds late in the season. 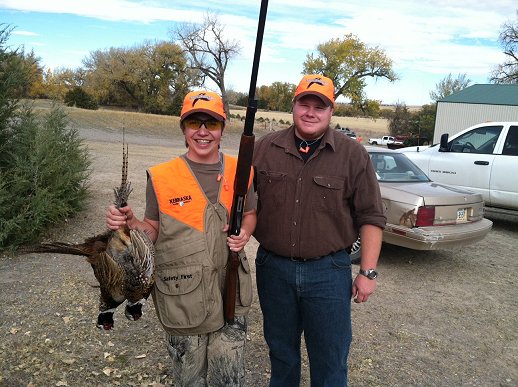 Pheasants are larger and slower than some other game birds such as quail, woodcock and grouse. This makes them ideal for introducing new hunters to upland bird hunting as they present a larger target that doesn’t accelerate as quickly on the flush as smaller game birds. Pheasants Forever is a national conservation organization with an extensive network of resources available, and it also holds youth mentor hunts every year to introduce youth to the sport of pheasant hunting. The program pairs new young hunters with experienced pheasant hunters to learn the basics of the sport along with firearm safety, conservation practices and pheasant biology. If you have a teen who desires to learn about pheasant hunting, a Pheasants Forever mentor hunt is an excellent way to start. You can find the Pheasants Forever chapter nearest you online.

Pheasant hunting is usually done with a shotgun, but there are a few hunters who prefer the challenge of taking them with a bow and arrow. While any gauge of shotgun will bring down a ringneck rooster with a solid hit, the most popular shotguns for pheasant hunting are 12-, 16-, and 20-gauge. Expert shooters may opt to use a 28-gauge, but few use a .410 bore due to the limitations of that cartridge. See Nexgen Outfitters’ wide selection of shotguns online HERE, or visit their store in Sidney, Nebraska.

Hunters will use 2 ¾- or 3-inch shotgun shells, the former being most common. Any shot size from No. 4 to No. 7 ½ will work, with No. 5 and No. 6 shot being the most often used as they offer the best balance between hitting power and pellet count. Nexgen Outfitters offers an excellent assortment of shotgun shells to pheasant hunters.

The three main kinds of pheasant hunting include group hunting in a line, hunting with a dog, and solo hunting. All involve walking through pheasant habitat to flush the birds for a shot. Line hunting is done by groups walking in a line abreast a few yards apart to either scare birds up along the route or push them out of cover to “blockers” waiting at the ends of the strip of cover on either side to ambush pheasants fleeing the advancing line. This kind of hunting can be done with or without dogs, but it’s important that all participating be particularly mindful of safety. The most common kind of hunting accident involves a hunter swinging his or her gun right or left to track a flushing bird and then shooting at the flying bird without noticing another hunter in the line of fire. Many states don’t require pheasant hunters to wear hunter orange garments, but doing so can reduce this kind of accident as hunters instinctively tend not to shoot if bright orange enters the sight picture. When line hunting it is also vital that everyone know where blockers will stand in relation to their position and that the blockers remain at their posts until the drive is completed. This is to prevent blockers from being hit accidentally. Each hunter should establish a safe “zone of fire” outside of which they will not take a shot. 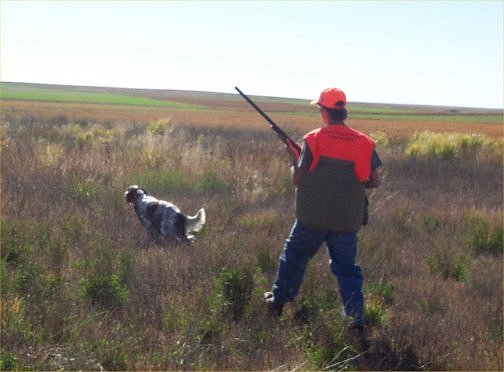 Few things are as fun and rewarding as pheasant hunting behind a well-trained dog. But be certain to follow some basic rules when you’re hunting with someone else’s dog. The owner should be the one to communicate with the dog. He or she has worked hard to instill basic commands and procedures for reward or correction. Never take it upon yourself to discipline another person’s hunting dog. If you are the dog owner, please be certain you’re able to control the animal in a wide range of situations. It can be frustrating for other hunters in a party if your dog runs off or flushes a bunch of birds prematurely. Everyone should take care when shooting so as not to risk hitting a hunting dog by accident. Be sure of your safe zone of fire boundaries and honor them. The dog may bring a felled bird to you. Only receive it from the dog if the owner gives permission. Many owners prefer the dog retrieve only to them, and then they’ll pass the game to you upon a completed retrieve.

Hunting solo for pheasants is arguably the most challenging method. Walking alone through the fields on a fine fall day provides excellent exercise and relaxation. Finding birds will likely be harder unless you’re solo hunting with a dog, but many choose this kind of hunting for the peace and quiet it typically affords. To be safe when solo hunting, it’s best to let a friend or family member know where you’ll be hunting. Give them a time beyond which they should be concerned if they don’t hear from you, and make certain to let them know when you’ve safely returned prior to that time. Carry a slip of paper with the name of your doctor and any known medical conditions you have on it. Such a note can be a real lifesaver for first responders if you should have an accident of medical incident alone in the field. The benefit of hunting alone is just that…being alone. The downside is the same…you’re alone if something goes sideways. Have fun, relax but be extra careful when hunting alone.

When pheasants become more wary as the season progresses, a change of tactics and ammo may be required. Birds will often flush farther away later in the year so I switch to No. 4 shot shells in 3-inch magnum loads. The heavier pellets and extra powder charge provide me with a few more yards of effective range. It’s also vital to hunt slowly. Take your time or you may pass by pheasants holding tight to cover. Also, moving too quickly and noisily can cause roosters to flush out of range. I keep my dog working closer to me during late-season hunts as well. 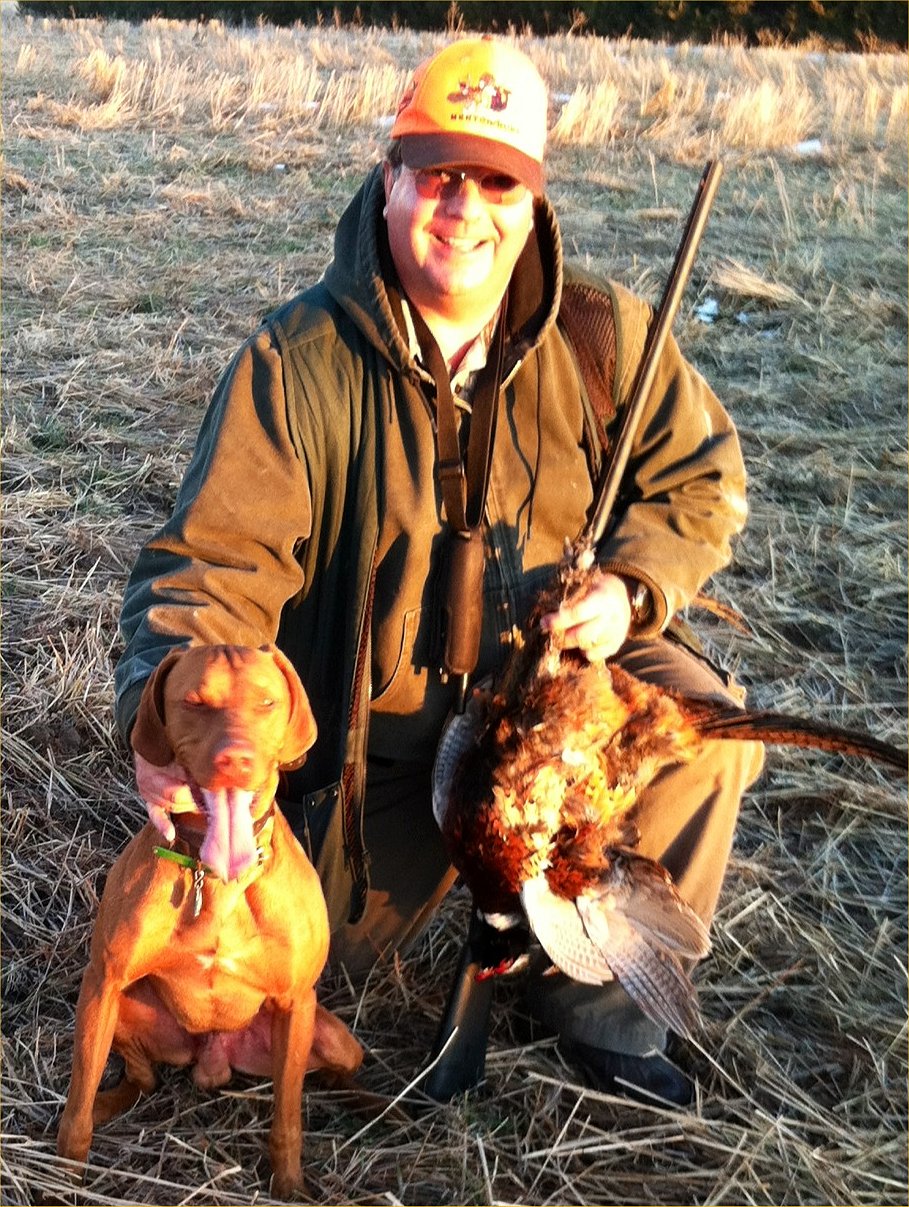 I hunt all kinds of game every fall but spend more hours in the field pheasant hunting than pursuing any other kind of game. It’s a sport that’s fun, typically only involves light to moderate exertion, and often yields a tasty meal or two per outing. I hope you experience the level of enjoyment I do when hunting pheasants. And remember…Nexgen Outfitters has all the pheasant hunting gear and supplies you need to enjoy a successful season.