Nexgen Outfitters recently became a retailer for Bersa firearms and currently has several Bersa handguns in stock. Founded in the 1950s, Argentina based Bersa has been making firearms for civilians and law enforcement agencies for decades. The company’s guns have a reputation for being both reliable and affordable. The most well-known of Bersa’s handguns is the Thunder 380.

At first glance, the Bersa Thunder 380 is often mistaken for a Walther PPK, the pistol made famous by James Bond, the fictional British spy designated “007” by his handlers. Indeed, the Bersa has often been referred to as a “PPK clone” because the two guns share several design features and are very close in appearance. In performance, however, the Bersa Thunder not only matches the Walther PPK, but it does so for about half the price. 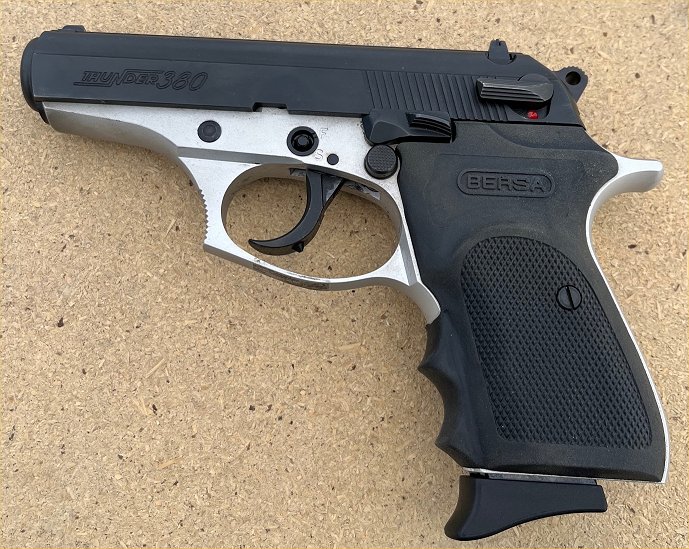 For this review, I purchased a Bersa Thunder .380 from Nexgen Outfitters. The Thunder is available in a variety of colors and configurations. Mine is the Duo-Tone model with a black receiver and brushed-nickel lower. These guns are all-metal construction, with the exception of the rubberized grip panels, which have ambidextrous finger grooves and thumb rests.

I have medium-sized hands and fingers, and the first thing I noticed when picking up a Bersa Thunder is how comfortable it is to hold. There’s a contoured place for my little finger on the base plate of the 8-round magazine, which allows a firm grasp. My Bersa Thunder fits my hand as though it were a custom gun made just for me.

Watching others pick up and aim a Bersa Thunder for the first time has yielded a common response. “That points really nice,” or a similar expression are the universal result. The gun just comes up and aligns with the target easily. The fixed, three-dot sights sit quite low on the slide, but this is a pistol intended for use at close range, so high-profile sights aren’t needed. The lower-sitting sights also prevent snagging on clothing or holsters during the draw. The sleek profile of the Thunder 380 makes it ideal for concealed carry.

Based on the original Walther PP design that debuted in the 1920s, the Bersa Thunder is a semi-automatic pistol with a straight blowback action. It’s a remarkably simple system that uses few moving parts. In fact, when disassembled for cleaning there are only three – the slide, the recoil spring and the frame/barrel assembly. This makes cleaning and maintenance a snap. 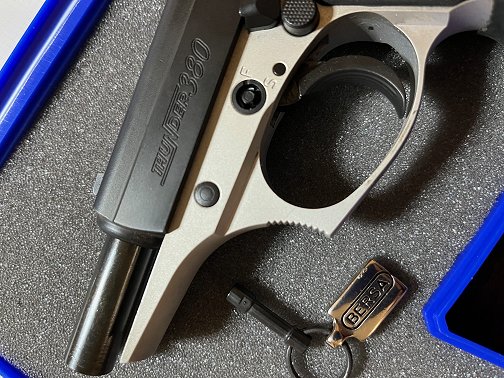 The Bersa Thunder 380 is a double-action/single-action, .380 ACP pistol with a safety lever on the left rear of the slide that also functions as a decocker. When you rack the first round, rearward motion of the slide locks the gun’s hammer back in the cocked position. Flip the safety lever to “on” and the mechanism safely lowers the hammer so you’re not having to carry the firearm “cocked and locked” like a 1911 design. Decocking the Bersa moves its trigger fully forward, making the first shot double action, and it’s a long, stiff pull before that round goes off. Subsequent shots are single-action as the trigger only moves forward a short distance to reset and the effort required by the trigger finger to get a shot off is far less with minimal creep. One can forego the long SA trigger pull on the first shot by cocking the hammer manually as one might do with a double-action revolver. Doing so moves the trigger back to a lighter, single-shot pull configuration. The gun also comes with a safety key that fits into a locking port on the left side of the frame. Once locked, the trigger is frozen and the gun is inoperable. 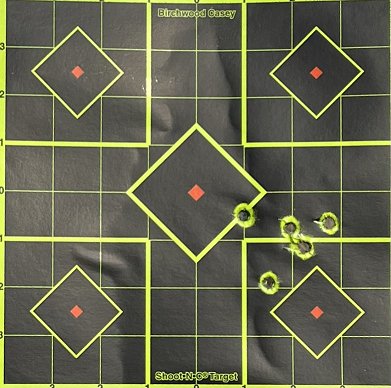 Testing on the range was done using Winchester white box .380 Auto ammunition loaded with 95-grain FMJ bullets. It was the only ammo tested as it was all I have been able to get. Ammunition, especially .380 caliber, has been very hard to come by since the pandemic began. In any case, accuracy was acceptable for a personal protection pistol. Consistent 2-inch groups were attained at a range of 10 yards shooting with the pistol resting on the front post of a Lead Sled. My shots hit slightly low and to the right of center. The heavier, all-metal construction of the firearm teamed with the blowback action to make recoil negligible. There were no failures to feed, and no malfunctions whatsoever, though my Bersa did need a break-in of about 50 rounds to get that long, double-action trigger pull on the first shot silky smooth.

There are a couple of things about the Bersa Thunder that may or may not be problematic for users. The gun will not fire without a magazine in the firearm. When doing drills, it’s important to remember you can’t fire a remaining round in the chamber unless a magazine is firmly seated in the gun. The slide does lock back after the last shot is fired. Also, the magazine release button sits too far forward for me to operate with my short thumb. I had to rotate the gun nearly 90 degrees to reach the button, but magazines do drop cleaning away when the button is pressed. Neither of these challenges are anything some practice won’t overcome.

In summary, the Bersa Thunder .380 is a capable firearm with many desirable qualities and features. It’s compact size and sleek lines make it a fine concealed carry firearm. And with a price tag around $300, you can channel your inner James Bond for less than half what 007 paid for his PPK.

Nexgen Outfitters is proud to be a Bersa firearms dealer. See its selection of Bersa handguns at the retail store at 100 Commerce Court in Sidney, Nebraska, or check out the online selection HERE.