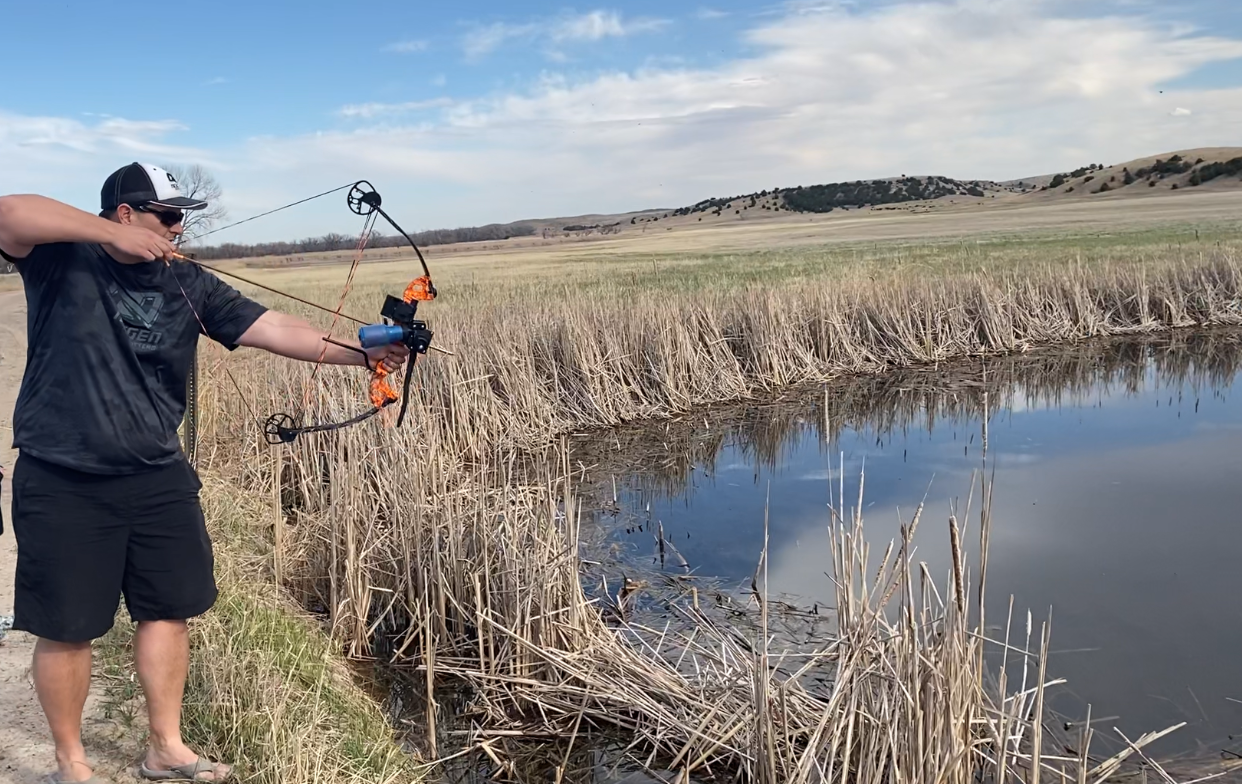 Spring is here and there’s no shortage of archers heading into the fields and forests in pursuit of turkeys. But they aren’t the only ones hunting with a bow right now. Warmer water temperatures have fish moving into shallow water to spawn, and that’s when bowfishing action really picks up.

To learn what’s involved in getting started bowfishing I visited with the archery pro-shop director at Nexgen Outfitters, Dan Gurr. He’s been bowfishing since he was a kid and knows exactly what kind of equipment is needed to maximize enjoyment of the sport.

“There’s a misconception I need to clarify from the start when we talk about bowfishing,” Dan told me. “And that’s that you can just take your hunting compound bow, put a reel on it, get some bowfishing arrows, and use your main hunting bow as your main bowfishing setup. You can, but I discourage it because it’s bad for your bow and could damage it.”

Dan went on to explain that most compound bows don’t mind a bit of rain or snow, but really shouldn’t get really wet. That’s because some of the high-end bows have sealed components that can be damaged if water gets inside. He also cautioned that bowfishing typically involves shooting and drawing the bow a lot in a short period of time. There will also be a great deal of half-draws and let-ups which, though not full-on dry-fires, can damage a bow as much as several minimal dry-fires. A dry-fire is drawing and releasing a bow’s string without an arrow. Plus, bowfishing shots are seldom more than 10 yards and usually less than five so there’s no need to be drawing 60-plus pounds when bowfishing.

For these reasons, Dan will usually recommend to customers wanting to begin bowfishing that they consider a separate bow setup when doing so. He suggests a recurve bow such as the PSK Kingfisher or Cajun Fish Stick , both of which come in packages that include reels and arrows, or a compound bow specifically made for bowfishing such as the Fin-Finder Poseidon Bow . These bows have lower draw weights than big-game hunting bows, resulting in less fatigue during an afternoon of bowfishing. He also suggests Genesis Youth Bows because they have no let-off and can be toned down to relatively low draw weights, something young shooters will appreciate and enjoy.

Bowfishing requires the use of special fiberglass arrows . These tend to run heavier than hunting arrows and are outfitted with a special fishing tip. The tips have sharp points for punching through heavy scales on big fish, and also have barbs to prevent the fish from shaking the arrow loose after a hit. Those barbs with either flip to face the front or the tip will unscrew to facilitate easy arrow removal.

Bowfishing reels come in a variety of shapes and sizes, and the kind to get depends on the user. Some, like the RPM Bowfishing M1 Reel, look a lot like the spincast reels many of us learned how to fish with. Others, such as the Fin-Finder Winch Pro Bowfishing Reel , look rather like a chopped-off softdrink bottle. And then there are the drum reels like the Cajun Bowfishing Screw-On Fish Reel that are quite inexpensive and easy to use. Dan Gurr invites you to reach out to him if you have questions as to which type of reel might be best for you.

To locate fish, Dan suggests you walk slowly along shoreline that has a lot of reeds or weedy cover. Polarized sun glasses will help reduce glare and enable you to see into the water better. And be sure to look for still water. Bowfishing in a current is difficult at best. When you see your target, make no sudden moves and slowly draw the bow. You’ll usually want to aim lower than your instincts tell you. That’s because the water refracts the image of the fish you’re seeing so it actually is not precisely where it appears to be. And don’t get frustrated! You will likely miss as many fish as you’ll hit. But the thrill of arrowing a fish and bringing it in more than makes up for the effort in fun.

Dan Gurr and the rest of the team at Nexgen Outfitters would enjoy helping you get started bowfishing. Just call or use the online chat feature on our homepage to get in touch and have your questions answered.